Several versions of LEGO Island are known to exist, either officially released or discovered.

A beta dated July 25th 1997 is claimed to exist, according to this tweet. Not much is known publicly about this build, however a changelog was found on the disc detailing all the beta releases leading up to it.

This build identifies itself as version 1.0.0.0. It's files date to August 8th 1997 making this is the earliest build known to have had a retail release. Both this build and the September build predate LEGO Island's official release date (September 26, 1997), making it unclear why this circulated in retail at all (considering a newer build was already produced before release). It's theorized that perhaps Mindscape had already manufactured copies of this build, and the changes introduced in the September were considered too insignificant to discard the already manufactured copies.

This version is only known to have been released in English and Japanese.

This build identifies itself as version 1.1.0.0. It's files date to September 8th 1997. This is by far the most common version of LEGO Island and the most likely version that any given copy will be, since it existed before the official release date and is the latest official version to be made. The exception is the Japanese version, which appears to have only had a v1.0 release.

v1.1 features a number of largely "quality of life" changes. Not much overall functionality differs between them, nor have many bugs been fixed. The following are the known differences between the two:

While all known non-English releases of LEGO Island are v1.1, a few versions feature differences that don't strictly affect gameplay.

In late 2019 it was discovered that the Korean release of LEGO Island contains logs and source files for the Interleaf files on the disc. These files would have been compiled into Interleaf files with Weaver, which would have been a necessary part of the translation process considering the Interleaf files contain the bulk of the voice clips. While the game itself is unremarkably still v1.1 code and the Weaver tool is still unrecovered as of this writing, these files are extremely interesting insights into the development process.

For unknown reasons, the Italian release features SecuROM DRM technology. It's unknown whether all Italian copies contain the DRM or whether any non-Italian copies ever featured it.

For unknown reasons, the Japanese LEGO Island installer features a version check that fails if the version of Windows you're using is not 4.x (e.g. 95, 98, or Me). This means the installer will fail on any Windows version newer (starting with Windows 2000). As such, for this version you should probably use the LEGO Island Alternative Installer.

These are versions where the game itself has been untouched, but other elements of the disc have been altered somewhat.

This release was a promotional tie-in with Cheez Mania cheese puffs. The main game is unchanged but the disc contains a Cheez Mania themed launcher.

No later versions of LEGO Island are known to exist. Even when the game was re-released in 2001, the September build was still shipped.

Through interviews with the game's original developers, it's claimed that a patch was written to fix the infamous turn speed bug but it never made it into any release or patch. If the source code hasn't been lost, it could be possible to produce another version with this (and any other patches that could have been made later on) implemented. But this is only speculation for the time being.

LEGO Island was released in several languages which are documented on a separate page. These have all been found to be v1.1 with only minor changes for localization purposes. Usually this boils down to replacing dialogue in the Interleaf files with all other files identical to the English release, but a few languages seems to have been recompiled the binaries too (particularly CONFIG.EXE which contains a lot of display text).

Most of the time you can identify your version by checking the "Last Modified Date" of the files. They'll usually be either August 8, 1997 or September 8, 1997.

As some language releases required further modification to these files, non-English releases may be dated later. If so, you can check the build version by right clicking LEGO1.DLL, choosing Properties, and selecting the Details tab. 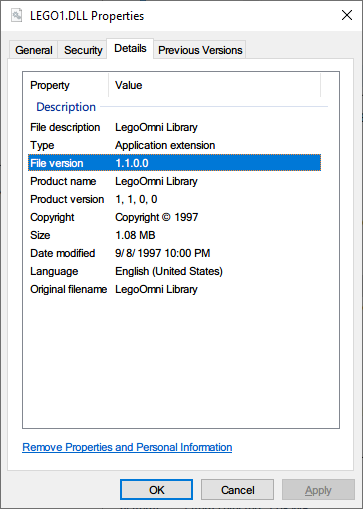 The vast majority of the time, your version will read 1.1.0.0 meaning you have v1.1. If your version reads 1.0.0.0 and is NOT English, or reads something else like 1.2.0.0, please contact us with information about your copy.